The extraordinary garden of Paolo Anselmo

The ceramic works of the Artiste Paolo Anselmo truly begin to take Off in the mid-1990s. Paolo Anselmo then decides to live in the South of France, in Biot,following the advice of his friend Franco Bratta, great animal sculptor, established with his family in Albisola (Italie). He handles clay with great skill. One of his first creations is a series of colored ceramic fish. In particular the Blue Whale showing her open jaws in a hilarious smile. The fauna and flora are his favorite themes. Not forgetting a few women’s heads topped with improbable and very graphic hairstyles. He also creates striking self-portraits where a piercing gaze escapes from a bald head.

In the mids-2000s, he meets Celeste, who will become a great source of inspiration, and decides to move and settle in Albisola Marina. Paolo Anselmo shapes with his hands exotic plants that gradually become animals. I remember a bright green ceramic triptych representing a cactus that gradually turned into a fish. This extraordinary transformation was both surprising and funny: the body of the cactus progressively changed and suddenly two eyes and a bridge red fish mouth appeared. One of his first most important exhibitions entitled “Lo Zoo and Paolo Anselmo “took place in Savona during july and Auguste 2009. The show exhibited, fantastic animals in colerful ceramic evolving between dream and nightmare.

Prehistoric monsters, covered with sharps spikes, burst out from Paolo Anselmo’s imagination to defy with a carnivorous grin, long necked animals, extravagant, giraffes with prominent lips. Another facet of his creation is his tribute to women. The most sensual parts of the female body are highlighted by suggestive underwear. Also, by putting together with his very own humor Japanese mangas and European caricatures, Paolo Anselmo’s Art remains universal. In the catalogue of the 2009 exhibition, “the Zoo and Paolo Anselmo”, art critic Philippe Daverio stresses the fact that Paolo Anselmo uses an archaic material: clay, to shape with his madness forms and colors suited to our time.

The artist is well in our time. He creates more affordable pieces such as large round dishes, decorated with banners of small fish, rather repetitive patterns that truly hypnotize us. Without forgetting that in Paolo Anselmo’s first big dishes, monster and laughingly staring at us with humor. From the sea to the sky, from the octopus to the owl, the Artist’s inspiration is to create a dialogue between one world to another.

To own a ceramic by Paolo Anselmo, is to bring into your soul, the imagination of globetrotter artist who not only masters the technique of ceramics, inherited from antiquite times, but also sweeps away the chartered course with an extravagant sense of humour in a burst of Rabelaisian laugther.

Ceramics is an artistic tradition from South that Paolo Anselmo has revisualised and recasted to make it contemporary and desirable to new generations. 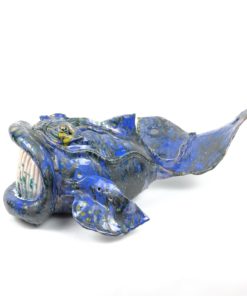 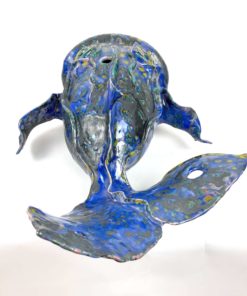 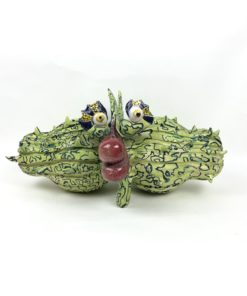 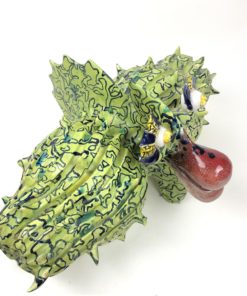 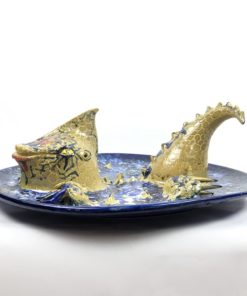 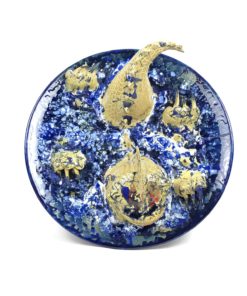 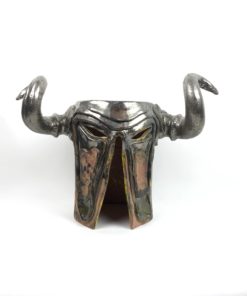 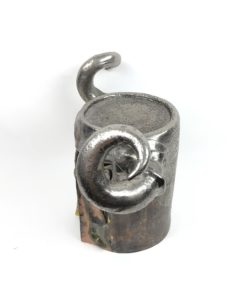